On Friday, US History students submitted their Immigrant Experience letters. This project is the first substantial independent work students do in the blended learning class. This year I asked them to submit an evaluation of three sources they planned to use a week before the letter was due, just to ensure that they’d given it some thought before the night before it’s due.

One thing I’m working to do even more of in this class this year is to create the sense that work doesn’t fall into a dark hole that only a teacher has access to once it is submitted. I asked students to upload their letters to a wiki, so they are available for other teachers and students to access. 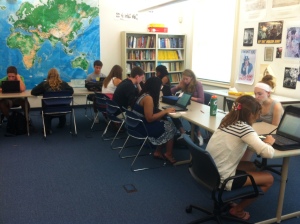 This year, I also took time in class for students to respond to each others’ letters. I used an activity that we did at the UNCCWP Summer Institute.  Students used sticky notes to offer feedback about something they learned, wondered about, and a connection they made to the immigrant group they studied after reading their classmates’ letter. We spent about 30 minutes with students standing up whenever they finished a letter and swapping with someone else who was finished. (This allowed everyone to read at his or her own pace.) 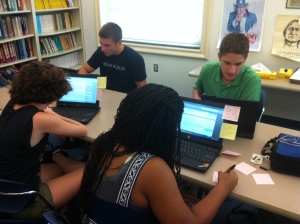 After the written feedback, students returned to their computers and read the feedback that had been left for them. We then had a brief discussion about commonalities and differences students saw in the letters that they read.

Finally, we debriefed the project itself. The biggest challenge was that a few students who had chosen to focus on British immigrants had difficulty finding resources specific to the time period we were examining. Next year, I’ll likely drop that group and add Jewish immigrants as an option instead.
Students agreed that the project allowed them to gain a good sense of what the everyday life of an immigrant in the late 19th/early 20th century would have been like. They also expressed that it was helpful to have annotations to the letter, rather than trying to cram the historical explanations into the letter, which they thought would have felt inauthentic. In thinking about how writing the letter might have differed from taking a test or writing an essay about the immigrant group, students noted that they prefer the work of “getting inside the head” of the immigrant persona they crafted. One student wonderfully noted, “We learned through the immigrants, rather than about them.”

View all posts by MsStewart

One thought on “Learning Through Them”